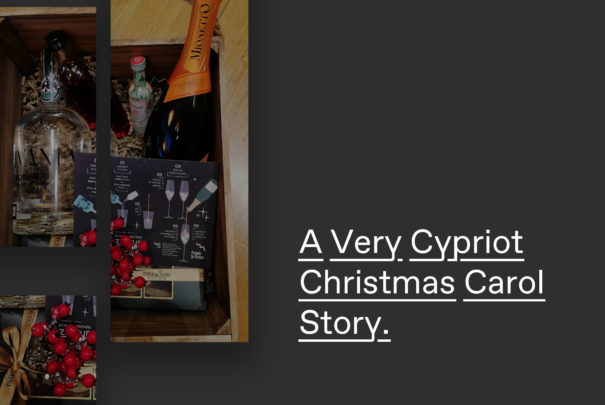 …and since every newsworthy Cyprus story has an elf accountant in it, here we go…

Once upon a time on a Mediterranean island full of multinational financial services and high tech companies, there was Anthony from Aglantzia..

A Cypriot accountant by profession but with his real passion in life being burger cooking and beer making.

Understandably, Anthony was pleasantly surprised and thrilled when instead of yet another group of companies consolidation of financial statements, the marketing fairies asked him to create two cocktail recipes based on the local island drink Zivania as his next work assignment.

Furthermore, the merry fairies told Anthony that the two new drinks were to be named the ZivitUp Twice CockTales, thus he knew that expectations were high but he was will(y)ng to meet their challenge.

A committee of totally independent experts was appointed (all Consulco staff and Anthony’s colleagues and close friends) to check out his proposed recipes.

Through an impartial, objective and formal selection process , Kormacit Zivania, coincidentally produced by the Managing Director’s dad, was selected for use as the cocktail base ingredient.

They say that money can’t buy happiness but it can surely buy the next best thing; chocolate.

So the marketing fairies decided to add chocolate into the Consulco festive gift basket.

There can’t be a Cypriot story without a Russian connection.. So, an assortment of chocolates from Platres with Cypriot flavours made by a Russian couple of chocolatiers living in this mountain village have been ordered.

Having faced one too many of bitter lemon experiences on the island of love, the Russian chocolatiers would not deliver the chocolates unless they were paid in full and in advance.

However, where there are Russians you also get the compliance elves. The payment had to go through the Cypriot bank’s compliance experts and urgency and speed were not part of their Christmas menu.

Considerable Time and effort have been spent by the bank’s compliance experts to ensure that the chocolates, their ingredients, their flavours and their bank payment did not breach any of the bank’s ever changing interpretations of an increasing number of EU and US restrictive and punitive embargos against Russia.

After the monies hit the Russian chocolatiers’ pockets, the chocolates were swiftly delivered to Consulco’s offices on Saturday and that meant that our marketing staff had to work overtime over the weekend placing chocolates in the baskets in a true, end of the year, sweatshop style.

During the next few working days the engaged experts, after lots of research, billable hours, and executive reports with long waivers of liability, stated that in their true and fair view, the glasses should be wrapped in fabric so as not to break.

The gift sweatshop team got back into action and finished wrapping up the baskets. The smiles on their faces when they were leaving the office premises after completion of their manual work were questionable. Did those smiles come about from the zivania, the prosecco, the ZivitUp cocktails, the chocolates, the nuts or the job satisfaction ?

Once the gift baskets got ready, the Consulco superhero messengers, Batman and Robin, started delivering the basket gifts to the firm’s clients and associates in their usual supersonic speeds. They were joyfully greeted by all the gifts’ recipients and their welcoming and tipsy secretaries.

So, the morale of this Cypriot Christmas carol story is that even when faced with many mishaps, lots of uncertainties and numerous challenges, a good team, like the Consulco team, with collective effort, innovation and perseverance can make it work, time after time.

So, when you get one of the Consulco basket gifts make yourself a ZivitUp cocktail drink, raise your half full glass, wink and make a toast: