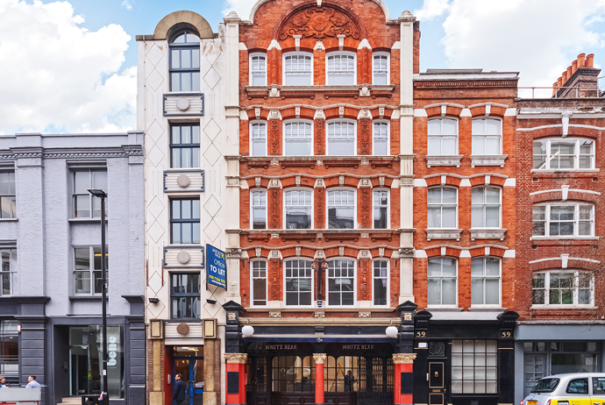 Consulco Real Estate is pleased to announce the completion of another successful refurbishment project in the heart of Farringdon.

57 St John Street comprises The White Bear Pub and is a Grade II Listed property. It is located at the southern end of St John Street, just 200m from the world-famous Smithfield Market and 300m from Farringdon Station. There has been a pub on the site for centuries – the current property was rebuilt in 1899 by the City of London Brewery Co. and suffered bomb damage in the second world war.

CRE has converted the building from a five-floor, single use public house in poor condition, to a pub on ground and basement with four one-bedroom highly specified flats above. CRE has brought the building back to life by restoring elaborate historic features that were either damaged or removed over time.

Our plans were originally rejected by Islington Borough Council, but we secured planning consent and listed building consent on appeal.

The construction process went smoothly, delivery within budget and on time. Within one week of completion, CRE has received seven offers on the flats and four offers on the pub.

The arrival of Crossrail next year will see the area transformed into one of London’s top cultural destinations. The Museum of London is scheduled to open within Smithfield Market alongside the City of London’s ‘Culture Mile’ initiative – a partnership of leading arts, learning and culture institutions. Farringdon station will be one of London’s busiest stations, connecting Crossrail, Thameslink and the London Underground to provide links with outer London, the Home Counties, the City, Canary Wharf and three of London’s airports.

This project demonstrates multiple skillsets. The property was acquired in an off-market transaction from Punch Taverns and we worked hard to secure vacant possession and a profitable planning consent. The CRE team applied its experience to create well specified commercial and residential units that it knew would appeal to the target market.

We look forward to The White Bear seeing through another 120 years within the community, soaking up more history and creating new stories.