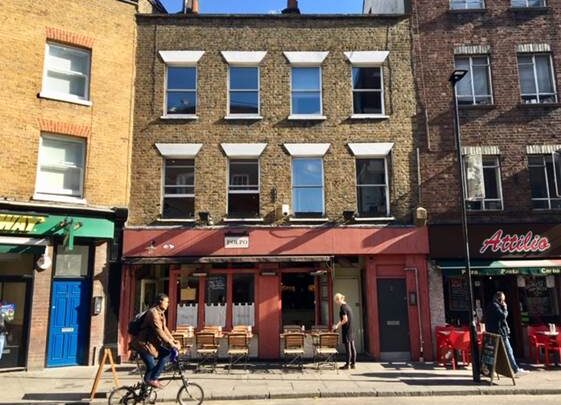 Consulco has completed the acquisition of 2/3 Cowcross Street, a restaurant and office investment located in the heart of Farringdon for £ 3,817,500.

The property sits just 25m from the famous Smithfield meat market and 150m from the two entrances to the new Crossrail station. The acquisition builds on Consulco’s existing portfolio in the area, having previously acquired six investments, all within 200m of the station entrances, including 1 Cowcross Street, the property next to the one just acquired.

Crossrail, the new train line is expected to bring an extra 1.5 million people within 45 minutes of central London, with an estimated 200 million passengers using the line each year. Farringdon station will be one of the busiest stations, connecting with Thameslink and the London Underground to provide links with outer London, the Home Counties, the City, Canary Wharf and three of London’s five airports.

Due to the better connectivity achieved by Crossrail, Farringdon continues to appeal to an increasing number of office occupiers. The recently completed 25 Charterhouse Square provides almost 40,000 sq ft of Grade A office space and is now fully let.  Meanwhile, LinkedIn has completed a deal to establish a new London headquarters at Farringdon Road.  It has pre-let 83,000 sq ft at the redeveloped former Guardian headquarters.

The Farringdon Crossrail stations provide two substantial development projects. Above the eastern station Helical is already on site building a 90,000 sq ft office scheme, which will be able to house over 700 workers and is due for completion in October 2019.

Meanwhile, HB Reavis is preparing to develop a scheme above the western station entrance, at the corner of Cowcross Street and Farringdon Road. This will comprise of 138,000 sq ft of high-quality office space. The building has been carefully designed by John Robertson Architects to integrate with Crossrail’s operating station.

The new stations will also underpin the recent City of London initiative; the ‘Culture Mile’ – a partnership of leading arts, learning and culture institutions. The area will become more visually, culturally and physically accessible, promoting ‘creative exchange’ and ‘cultural collaboration’ with the completion of projects in the area.

The Culture Mile will include the Museum of London’s relocation from the Barbican to the currently derelict western end of Smithfield Market, located 250m from 2/3 Cowcross Street. The Museum describes the new location as “the heart of a new cultural hub in the City of London with outstanding links to the rest of London and the world, and in doing so they expect to become one of London’s top five most visited museums.

At the end of 2018, the City of London Corporation was chosen as the preferred purchaser of Barking Power Station’s 42-acre site in east London for approx. £125m, with the intention to consolidate the three central London food markets; Billingsgate, Smithfield and New Covent Garden. This will free up the rest of Smithfield Market as an area ripe for redevelopment. The Grade II* listed structure has previously had plans for a new retail destination, similar to Covent Garden’s market. With the Culture Mile initiative, we expect similar plans to arise once the relocation is confirmed.

Due to the above factors we expect further substantial improvements to the Farringdon area. The area’s improving connectivity, rapid regeneration and its increasing appeal to tenants and visitors will fuel its property rental and property capital values growth.