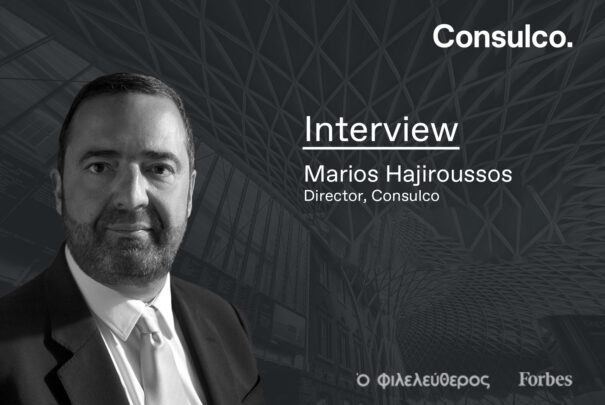 Marios Hajiroussos, CEO of Consulco Group, was featured in Forbes’s October issue “Top CEOs”. The Forbes editorial team selected and presented to their audience the top CEOs of companies based in Cyprus, from various sectors of economic activity, through a multi-page issue. Consulco, as one of Cyprus’s specialist investment managers structuring and managing real estate, credit and private equity investments in London and Europe, is proudly a part of the issue. Read below Mr. Hajiroussos’s interview.

How demanding is the position of the CEO in a company like Consulco?

I believe that the goals we set for ourselves, and our teams are inextricably linked to our work. Consulco is a company that has always strived for growth and expansion.

Our firm has an outward-looking mentality, with offices and investments in a variety of international markets. This adds different time zones, multiple languages, different cultures, uneven regulatory frameworks, and a lot of travel to my role.

To what extend has your work been affected by the pandemic and the war in Ukraine?

There has been little direct impact of the Russian-Ukrainian crisis on our operations. For the past 12 years, we have progressively reduced our activities in Russia and Eastern Europe while boosting our exposure and nexus in the UK.

In recent years we have ceased to maintain offices in Russia and Eastern Europe.

Even though we and our activities have been relatively unaffected by the crisis, it is apparent that Russia’s invasion of Ukraine has had an impact on the global economy, igniting a rapid inflation that forces the interest rates to rise. As a result, we, like other firms throughout the world, must confront the opportunities and risks of this new situation.

What are your estimates regarding the course of the Cypriot and global economy in 2023?

It’s all one world now. Countries and economies are so intertwined that, once something goes wrong in one corner of the planet it quickly spreads like fire.  Such cases include Lehman Brothers, the Dot-Com bubble in the US, the coronavirus from China, the war between Russia and Ukraine, the Gulf war, the OPEC oil embargo, and many others. The majority of recent recessions have been caused by a combination of rising interest rates, budget deficits, and high energy prices.

Experience shows that recession-recovery cycles are more and more frequent, as a result of which we are called to adapt and move quickly, to seize the opportunities and mitigate the risks presented by each cycle.

The imminent recession of 2023 is the result of inflation fuelled by rising demand and short supply of products, as well as higher energy prices. Central banks will raise the interest rates to battle the growing inflation, causing the economy to stall and kickstart the impending recession.

To navigate safely during such times, businesses must have sufficient liquidity while also earning investment income to beat inflation using secure, short-term, and liquid assets.

How do rising interest rates and inflation affect your investment activities?

On the one hand, our group’s lending firm, London Credit, will benefit from increased interest rates since interest revenue will grow and the investment returns, we can provide our investors with would be higher.

On the other hand, Consulco Real Estate, a firm within the Consulco group that works with the ownership and exploitation of real estate, is forced to pay higher interest rates on its loans in order to achieve full rents. With prudence and foresight, all our loans have been structured at low levels and with interest hedging instruments in place, in order to remain protected against interest rate rises. At the same time, we know that real estate is an asset whose values ​​and income eventually increase alongside with inflation.

What do your company’s future plans include for an expected crisis?

Every change brings opportunities and risks. The crucial thing for a firm is to be able to identify both and plan its course of action in order to take advantage of the opportunities while protecting itself against risks.

In the event of a recession, our strategy entails selling secondary assets and accumulating liquidity, which may then be invested in London Credit, which provides short-term financing in London using real estate collateral, so that we earn high interest income. As a result, these earnings will be able to counterbalance the inflation’s wealth erosion effect. At the same time such liquid investments can be readily deployed at short notice when the time and prices are right for opportunistic investments.

Opportunistic investments that may be available at favorable pricing during an economic slowdown that are of interest to us include distressed asset lending, prime property acquisitions and well priced private equity placements in sectors with long term potential.

You know the English and Cypriot markets. How do the two compare in terms of their investment audience?

When comparing the UK with Cyprus for inbound investment, it is clear that the United Kingdom draws a big number of institutional investors from established markets such as the United States, Canada, Europe, and the Far East. The UK’s solid economic fundamentals attract such investors in huge numbers. Cyprus must quickly implement structural improvements in its public sector, judicial system, education, and supervisory bodies to attract more global institutional investors from the aforementioned markets, which would enhance our country’s tax revenues, employment, and reputation.