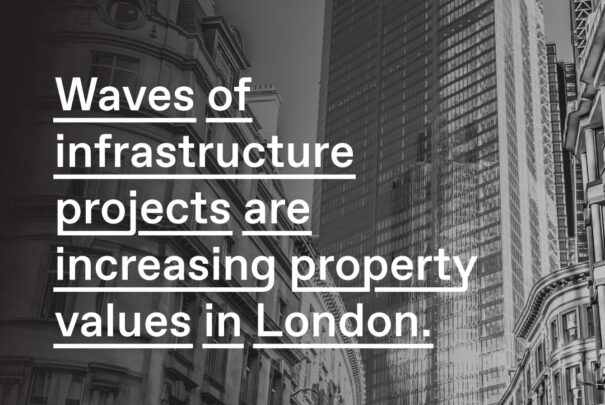 Large Infrastructure projects and their impact on property values.

As London has evolved and grown over the centuries, it has benefitted from waves of infrastructure projects that have boosted economic activity and increased property values.

In the eighteen century, the new canal network allowed wool and coal to be shipped more quickly and cheaply to and around the capital, whilst the nineteenth century saw the rise of the railways bringing change to the areas around the termini.  London was changed forever by the expansion of the underground network in the early to mid twentieth century.  The new ‘tube’ lines allowed London to expand into the surrounding countryside creating the suburbs, whilst allowing those who lived there to easily commute into the centre.

In more recent times, the opening of the Docklands Light Railway and the Jubilee line extension created the platform for the redevelopment of the old docks to the east of central London into Canary Wharf (a commercial centre that now rivals the City of London) and new residential areas to house London’s growing population.  The Northern line extension, which opened in earlier this year and is the first major Tube extension this century, is already playing a vital role in regenerating the Vauxhall, Nine Elms and Battersea areas.  The 3km twin-tunnel extension links Kennington station (Zone 1/2) with two new step-free stations – Battersea Power Station and Nine Elms (both Zone 1).  It gives access to the West End and the City within 15 minutes and supports thousands of jobs and homes.

The new stations, public space and associated developments will add to the fabric of the landscape, act as a catalyst for regeneration and influence the way people experience the city and its suburbs.  The Elizabeth line will make travelling in the capital easier and quicker and will reduce crowding on London’s transport network.

CBRE reported that since Crossrail got the go ahead, house prices around the affected stations increased by 20%. This is on top of underlying capital appreciation in London and the South East. Although this partly pre-empts the actual transport benefits and value increases that will be felt from its opening, at this stage it mostly reflects the swell of confidence into these areas and the physical regeneration already underway.  CBRE forecast that the biggest winners will be Ealing Broadway, Farringdon, Paddington, Bond Street and Tottenham Court Road. Homes in these areas could see higher increases, of up to £100,000.

In 2020, Councillors gave a green light to the compulsory purchase of the landmark Elephant & Castle shopping centre so that it can make way for nearly 1,000 new homes.  Southwark council approved the order on behalf of developer Delancey, which plans to demolish the 55-year old mall.  It also gave the go-ahead for £200,000 of extra funding for traders who will be displaced.  Delancey has consent for a new pedestrianised town centre with a building for the University of the Arts London, leisure and office space and a new station as well as 979 homes.

To the west of central London lies Old Oak Common.  There, local authorities and other statutory bodies gave pieced together over 650 hectares of brown field land that will provide over 25,000 new homes during the next 15 years.

Large infrastructure projects boost property values in two key ways.  Firstly, they intensify the use of the land – with high-rise apartment blocks and offices able to house many more residents and office workers than before.  Secondly, they attract young, affluent residents into previously poorer areas, dramatically boosting spending power.  The impact of these trends trickles down, bringing in new retail and food/beverage operators able to pay higher rents, thereby increasing commercial property values in the surrounding area.

Consulco has been successfully investing in London regeneration areas for 11 years.  We identified Farringdon as a hot spot and now hold eight investments within 200m of the new Crossrail station, together with assets in Ealing and Royal Docks that will also benefit once the Elizabeth line opens.