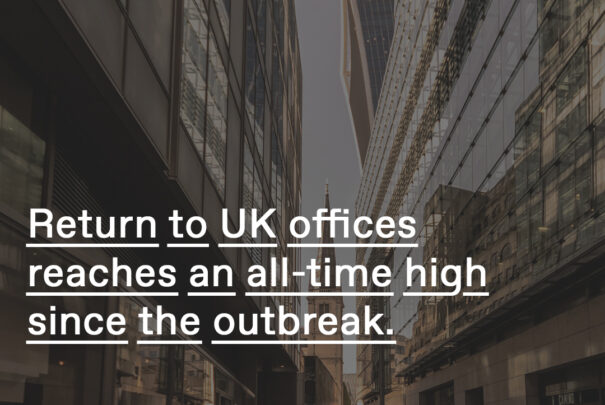 Return to UK offices has reached an all-time high since the outbreak began.

Data shows that London workplaces are busier than at any point since the epidemic began, as the return to commuting accelerates. Workplace occupancy rates have risen to 40+%, while the pace has slowed outside London.

People are coming back to UK offices in greater numbers than at any time since the epidemic began, as corporate mandates and relaxing of restrictions gradually entice employees back to work.

During the second week of March, office occupancy hit 42%, surpassing the previous highwater level of 40.1% set on October 14, last year, when London was still reopening following the third shutdown. Before Boris Johnson announced the very first work-from-home directive in March 2020, average occupancy was over 63%, but it quickly dropped to close to 10%.

However, average occupancy levels in the UK remain at 25%, well below pre-pandemic levels, calling into doubt the viability of some workplaces and putting pressure on firms that rely on the office worker trade to thrive.

Working from home regulations were abolished across the UK in late January, hastening people’s return to the workplace. Lorna Landells, a consultant at Remit, described the new high as “a significant milestone.”

“Since the relaxation of restrictions, we have seen an incremental increase in the volume of staff working in the office, with occupancy rates increasing by a few percentage points each week,” she added.

The West End of London had the greatest occupancy of any neighborhood in the metropolis, with average levels reaching 31.1% last week. The region around Holborn, on the other hand, had the lowest level, at slightly over half that.

“Our theory is that the West End gets more visitors, more shops are open and there’s therefore more life . If shops are closed, then why would you schlep in just to sit at a desk?” said Landells.

Commuters have only gradually returned to pre-pandemic habits and working from home remains the preferred option for most people on Mondays and Fridays. With many individuals remaining wary of travelling, isolating themselves due to coronavirus, or working from home, the entire impact of hybrid working on the viability of workplaces remains to be seen.

According to the Freespace Index, a metric generated by workplace sensor firm Freespace, occupancy during the second week of March was 25% on Monday, 40% on Tuesday, 36% on Wednesday, and 42% on Thursday. On Friday, though, it had dropped to only 13%. In London, it averages 31% for the week, which is still less than half of pre-pandemic levels. “It appears there’s plenty of life in the workplace still,” said Freespace CEO Raj Krishnamurthy. “We are moving in the right way in terms of occupancy, but it is now more meaningful in terms of how people want to work, what areas they use, and what the overall goal of the office is.”

“Normal [occupancy] is probably 60 per cent for most companies — but it’s still a long way to go from where we are to 60 per cent,” said Mat Oakley, head of European commercial property research at estate agency Savills. “I think [occupancy] numbers will come up as the weather improves and with a bit of peer pressure.” he added.

According to Oakley, gross demand for offices has dropped 7-14 percent since the pre-pandemic years, with lower-quality workplaces expected to be hurt the worst. Hybrid modes of working will also continue to have an influence on city center high street enterprises. However, if employees’ spending moves closer to their homes, “for some high streets this agile working trend could be their saviour”, said Oakley.

Meanwhile, according to a research conducted by the City of London Corporation, 72% of full-time employees believe that creating business ties is easier when they are situated in the office.