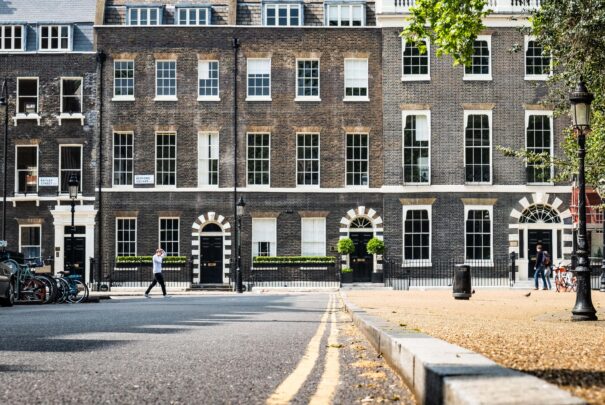 Although central London covers over 10 square miles, it breaks down into a number of clearly defined “villages”, each unique and yet part of the whole.

After the Great Fire of London in 1666, development beyond the old City walls accelerated.  In particular, the fields and meadows to the west proved most attractive, downwind from the squalor and stench of London in the early modern period.

In many cases, the landed gentry that owned these farms did not have the funds to develop the fashionable squares and terraces demanded by a growing upper middle class.  Instead, they leased out land to developers which would revert back to the family centuries later.  This arrangement shared the risk, provided an income to the freeholder from the ground rent and gave the family an urbanised, developed neighborhood for the future.

Large parts of central London remain in the ownership of the original families and are now known as the “Great Estates”:

Each area was usually developed around a central square, or series of squares, often accessible only by the owners of the nearby houses.  Trees were planted to give summer shade which now – over 250 years later, provide a majestic site in the busy city.  Wide streets were constructed to allow horses and carriages to perform 180 degree turns – so different from the medieval lanes and alleys of the old city.  And at the rear of the townhouses, developers constructed small two-story mews; the ground floor for the horses and the first for the grooms.

The streetscape in many of these villages remains exactly the same as when built; a gentleman born in 1800 but transported through time to 2021 would still be able to find his way from Sloan Square to Oxford Circus.  While many properties have been converted to apartments or offices, the strict planning regime has ensured that most original buildings remain intact.

The great estates have always taken their role as custodians seriously, but over the past 30 years they have become far more proactive, and now seek to carefully curate their portfolio.  Operating independently, each estate looks to maximise income and value by managing the retail mix, preventing wholesale conversion to offices in the 1990s and now ensuring a range of residential units to maintain a year-round population.

The legacy of the great estates has been reinterpreted in recent large scale regeneration projects.  The area to the north of King’s Cross station, Canary Wharf, Stratford and Earl’s Court share the same DNA as the great estates – mixed uses, great public spaces and housing for all budgets.

Over the past 30 years, three property companies have acquired significant property investments in tight geographical areas and are now able to act as the great estates do.  Soho Estates, privately owned by the descendants of Paul Raymond, holds a large slice of Soho.  Shaftesbury PLC owns 16-acre and approximately 600 buildings, clustered mainly in Carnaby, Seven Dials and Chinatown, but it also holds substantial ownerships in east and west Covent Garden, Soho and Fitzrovia.  Finally, Capital & Counties manages over 1.1 million square feet in Covent Garden and welcomes over 40 million visitors per year to this leading global retail and dining destination in the heart of London.

Whilst not quite to the same scale, Consulco has substantial experience and operates profitably in Soho, Covent Garden, Farringdon and ‘trendy’ east London.  Having made our first acquisition in these villages over 11 years ago, we are well placed to advise on opportunities in these “Consulco villages” and across central London. The London property market is incredibly dynamic; new trends, locations, and tenants constantly emerge. Consulco has built, through the years, an impeccable reputation and an impressive track record for structuring, developing and managing London Real Estate investments for the benefit of our clients. London real estate was, is and will remain on of the top property investment destinations for the global high net worth community and professional investors and our team is here to support and guide you.