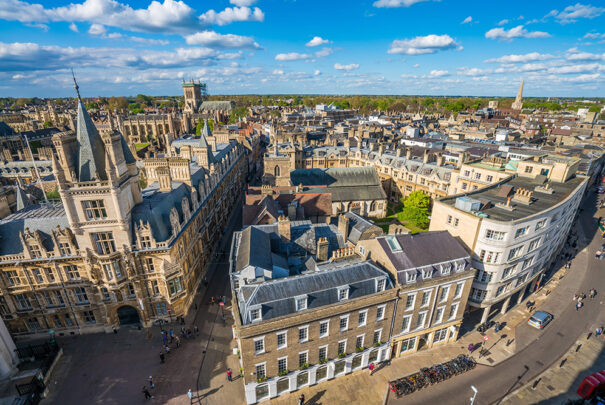 The Oxford-Cambridge Arc is developing fast.

There is no available laboratory capacity in Cambridge due to a rapid increase in demand by knowledge-based companies moving into the area and a severe supply shortfall.

All of Cambridge’s existing available lab space, totalling 29,438 sq ft, is currently under offer, as is an additional 134,400 sq ft of renovated lab space in the development pipeline, according to data from Savills.

The agency told Property Week that a lack of speculative development, combined with for a surge in investment in healthcare and life sciences, was responsible for the space crunch.

“If you were a lab occupier and you knocked on my door to take a fitted lab space and you needed it in the next six months, I would have zero options,” said William Clarke, director in the business space team at Savills Cambridge. “There is lab space being fitted as we speak, but all of it is under offer and the existing buildings are under offer too.”

He added: “Demand is at levels we’ve not seen before. We have lots of very sensitive circumstances hanging over our heads at the moment, which means we’re focusing very heavily on healthcare. So, it’s partly due to the demand, but it’s also because we haven’t seen much speculative laboratory development in the past.”

Sue Foxley, research director at Bidwells, added: “Requirements are at their highest level since AstraZeneca sought space back in 2014, with a sharp increase in life science companies seeking floorplates over 50,000 sq ft over the last year.”

In the first half of 2021, take-up of office and lab space in the Cambridge property market reached 193,334 sq ft, almost in line with the 10-year average.

According to Savills, life science and technology occupiers triumphed once again, accounting for little more than 67 percent of all transactions.

“In addition, the success of the Oxford-Cambridge Arc’s knowledge-based economy is attracting record levels of funding, both via venture capital and IPO, for consecutive years means that start-ups and scale-ups are having to vie for limited space.”

Consulco is currently structuring its new fund with three investment strategies; one of them is to invest in properties located in the areas of the elite universities of Oxford and Cambridge and in the arc that links them​. The growing number of knowledge-based industries in the aforementioned Arc will create 950,000 new jobs, which, subsequently, will generate demand for an additional 50% of commercial floor space which is vital. Both markets (Oxford and Cambridge) have already started experiencing a rise in investments, and institutional capital is entering their commercial real estate sectors. Other Brain Belt cities, such as Bicester, Milton Keynes, and Bedford, are expected to gain as the region grows. While the office market in Milton Keynes is well established, the markets in Bicester and Bedford are still developing. Also, regarding the increased demand in residential space as well, the Mayor’s Draft London Plan, predicts that 65,000 new residences will be built each year, till 2030, something that will help with the housing shortage issue of London’s area.